Your company likes the idea of using Microsoft Teams for your PBX. You’ve looked online, read some documentation, but you’re still a little confused about how much it costs.

Mike Smith is the Founder and President of AeroCom and has been helping companies with telecom and cloud services since 1999. He has been the recipient of numerous business telecommunications industry awards and in 2011, he was honored as one of the top 40 business people in Orange County, CA., under 40 years old. Follow Mike on LinkedIn, Twitter, or SpiceWorks.

How much does Microsoft Teams phone system costs?

Let me break it down for you.

These are all prices that don’t include discounts that you might have on your Microsoft licensing.

You might also be wondering “what happens to those phones we have around the office that don’t have an Office 365 license, so like a kitchen phone or a phone in your conference room. Right now, there’s no Office 365 E3 license sitting with those, so what do you do about those?” 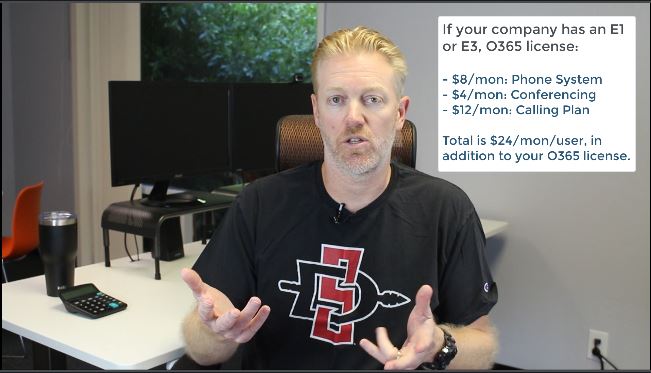 E5 actually includes a Phone System feature and a Conferencing features and those features are covered, but E5 does not include your Calling Plan feature per user.

So even if you have E5, you still have to pay either $12 per month or $24 per month per user for your Calling Plan in order to get dial tone.

It almost makes sense to jump to E5 if going to go to a Microsoft Teams phone system. It’s only a couple dollars more per month to do that as opposed to adding the Phone System feature and the Conferencing feature. Then, for those couple of dollars you get a bunch of other security features with your Office 365 licensing that you’re probably going to want anyway. If I were you, I’d be looking at maybe going into an E5 license and then adding your Calling Plan per user to in order to get the dial tone for your Microsoft Teams phone system.

But you may not want to go to Microsoft direct to do all that, and you might want to look at my other videos. They’ll tell you a little bit more about direct routing and how you might want to find a third party hosted VoIP provider to buy that Calling Plan from so that you get better support. If you want to learn more about that, look at the other videos. But I hope that gives you some idea about how Microsoft Teams phone system pricing works.

If you have any questions, please reach out, either email me or call me. I’m happy to answer any questions you have or give you recommendations on third party hosted VoIP providers that’s a great option for you to quote instead of going to Microsoft direct. Have a great day.