Your company is considering replacing your phone system with Microsoft Teams Phone System. So, which Office 365 license does your company need? E3? E5? Is that all you need?

In this video, AeroCom President, Mike Smith, tells you which license your company needs, the additional costs to consider, and alternatives to going direct with Microsoft.

Click here to search for hosted VoIP providers who integrate with Teams.

Need a recommendation on the best phone system solutions for your company? Click the button below to request a free assessment.

Mike Smith is the Founder and President of AeroCom and has been helping companies with telecom and cloud services since 1999. He has been the recipient of numerous business telecommunications industry awards and in 2011, he was honored as one of the top 40 business people in Orange County, CA., under 40 years old. Follow Mike on LinkedIn, Twitter or SpiceWorks.

“Is that all we need to pay or how does that work?”

Well the answer to that is that you can use an E3 license and add the phone system feature to it, but it’s probably more cost effective to just do the E5 license. The reason is because once you add up all the features (your company’s probably going to need), it’s more cost effective to just have the E5 license, rather than adding on to the E3 license.

Okay, once you do that, you’re also going to need to purchase a calling plan for every user in your office, and that’s usually approximately $12 per month, per user for the calling plan. What that includes is pretty much unlimited domestic calling within the United States (if you’re a United States based company). 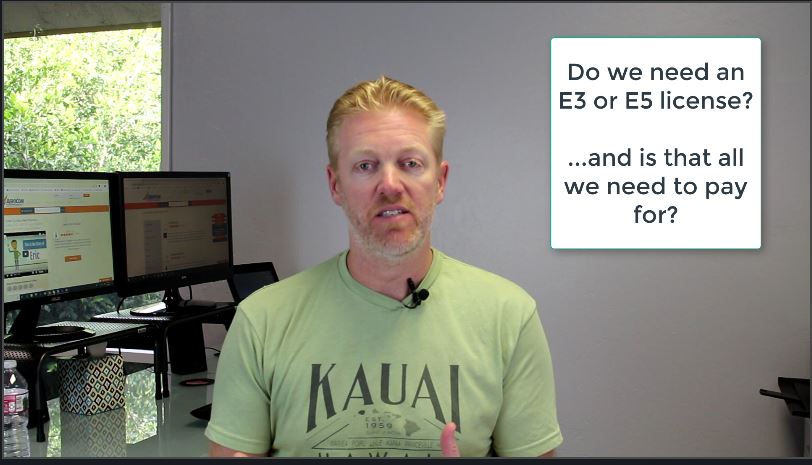 So, you’re going to upgrade to an E5 license and you’re going to have to pay approximately 12 dollar per month, per user. I hope that helps to understand things a little bit.

Another option you might want to think about is instead of going to Microsoft direct, you could use a third party hosted VoIP provider and through them, they can use your existing E5 licensing, through direct routing. You could purchase the calling plan through that provider, instead of Microsoft Direct. It’s about the same cost, around $12 per month per user.

The advantage is instead of having to go through Microsoft direct for support, (which is sometimes a little bit hands-off)… Instead of doing that, you get to go through a third party hosted VoIP provider for your support, who offers live, 24 x 7, full support… And they’ll also help with the implementation, and provide a little bit more of a hands-on feel. That might be an easier route to go, and it’s about the same cost. You’re going to need your E5 license and then you purchase the calling plan through that third party hosted VoIP provider, who’s also very experienced with hosted VoIP and that might just be a better option if you’re going to go the route of Microsoft Teams phone system.

I hope that was beneficial and if you have any questions or you want some recommendations on which third party hosted VoIP vendors you can use for native Microsoft Teams platform, please reach out to us. I’d be happy to help you, or just answer any questions that you have. 877-465-3505. AskMike@aerocominc.com.