If your company is exploring the idea of using Microsoft Teams Phone System for your PBX, you’re probably wondering how much (exactly), it will cost.

Does E5 cover it? What if we don’t want E5? What’s the Business Voice bundle? Do we need conferencing? Should we use a 3rd party for the Calling Plan?

In this video, Mike Smith answers all of these common questions, and gives you his recommendations on evaluating the price options of Microsoft Teams Phone System.

Want to know which third party VoIP providers Mike recommends you quote, for your Teams Calling Plan? Click the button below and ask him today!

Your company is looking into Microsoft Teams Phone System. And one of the things you’re wondering about is pricing, how much does it cost?

Number one is the phone system feature.

So when you add those three things up à la carte, typically the phone system feature is about $8 a month standard pricing, not including discounts. The conferencing feature which is optional, is about $4 per month à la carte, and that’s not including discounts. And the calling plan is anywhere between $8 to $12 per month for their plan that includes a couple of thousand minutes, maybe 3,000 minutes per month, per user, depending on the Office 365 license that your company has for your users. Do you have a business basics license, or do you have an E1 or an E3 license? So those are the basics around pricing.

Now where things get a little complicated is if your company has an E5 Office 365 license. If that’s the case, then the phone system feature, and the conferencing feature are already included in the E5 license. But what’s not included is the calling plan. So you’d still have to get a calling plan on top of the E5 license. 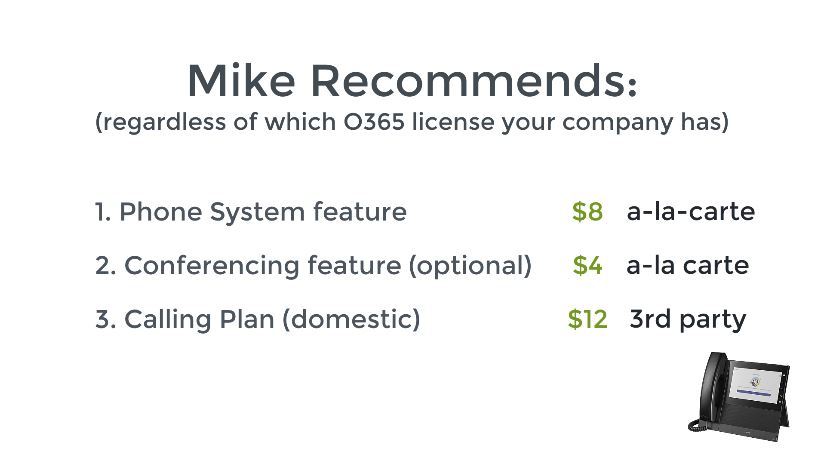 And then for your calling plan, purchase that separate. So purchase your calling plan separately from a third party voice provider that does what I call direct routing as a service. What that does, and it’s same approximate pricing that you would pay Microsoft directly. So eight to $12 per month per user, except that those third party providers, when you purchase the calling plan from them, you get unlimited free live customer service. So that’s something you’re not going to get from Microsoft if you buy the calling plan from them direct. Microsoft as we all know, has a little bit of a hands off approach when it comes to customer service. So it’s a much better route to go. It costs about the same amount of money. Your users are going to have the same great Teams phone system experience, except that you’re going to have a much better implementation. You get help with your implementation. They show you demos ahead of time, ask you a bunch of questions about your company’s needs, help you with porting phone numbers, and long-term, you get unlimited live 24/7 support. So if your phone lines go down, you have a voice outage, something like that, you can call someone and talk to somebody live. You’re not having to deal with Microsoft.

So I hope that gives you some ideas on pricing, and how much it costs to have Teams phone system. But overall, there’s still a lot more to talk about when it comes to Team Phone System. So instead of trying to research it online, just call me (714-593-0011), or shoot me an email. Our company deals with all of these different things that we talk about every single day. I can ask you a few questions about your company, give you some great recommendations on Teams Phone System. Don’t try to search Google. Don’t try to search Microsoft’s website. It’s huge. It’s really confusing. You’ll never really get the answers you want.

Call me, it won’t cost you a thing. Our company is a broker for all the major internet and hosted PBX companies. All the companies that do all these things we talked about, and those companies pay us our broker fee. So your company doesn’t have to pay us at all. So there’s absolutely no reason not to call me and ask me for advice, because it’s free advice for you, and it will save you a lot of time and confusion. So I hope that helps a little bit about Microsoft Teams Phone System, have a great day.