In this short video, Mike Smith gives 3 undeniable reasons why most companies, large and small, should buy a cloud phone system.

Which cloud PBX vendors should your company quote? Click the button below and ask Mike today!

So one question I’m asked all the time, or I see customers pondering all the time is, “Should our company purchase a Cloud PBX or should we go with an on-premises PBX?” So right now they have an on-premises PBX, which is end of life, and they’re wondering, “Hey, it seems like everybody’s starting to move to the Cloud. Maybe there aren’t as many phone system options for on-prem anymore, but what should we do?”

Well, I can tell you right now, in the year 2020, absolutely 99% of the time the answer to that is you should go with a Cloud PBX. Your company should go with a Cloud phone system. That’s just the way the market’s going. We talk to companies all the time who are moving off of on-prem phone systems. Whether you’re a large company or a small company, the answer is the same, there’s only a couple scenarios where an on-premises PBX is still the best fit. But for the most part, Cloud PBX is the way to go.

“Why?” you’re asking. Well, number one is cost. The cost of an on-premise PBX, you have to look at several things. Number one, you have to look at your dial tone, your landlines. So how much are your landlines costing you per month? Maybe have SIP trunks. So maybe that’s a little bit less than landlines, but if you have landlines, absolutely, you’re paying a fortune for those on a monthly basis. So the cost of landlines is expensive. Also, the licensing costs for your on-premises phone system is expensive. Also, the maintenance contract on your on-premises phone system is expensive. Overall, you’re spending a lot of time on your on-premise phone system. So that’s a cost you’ve got to figure out as well, time is money. And then you look at small costs, but they’re a big deal, like space. Where is the phone system sitting at, and how much space do you have in your phone room? 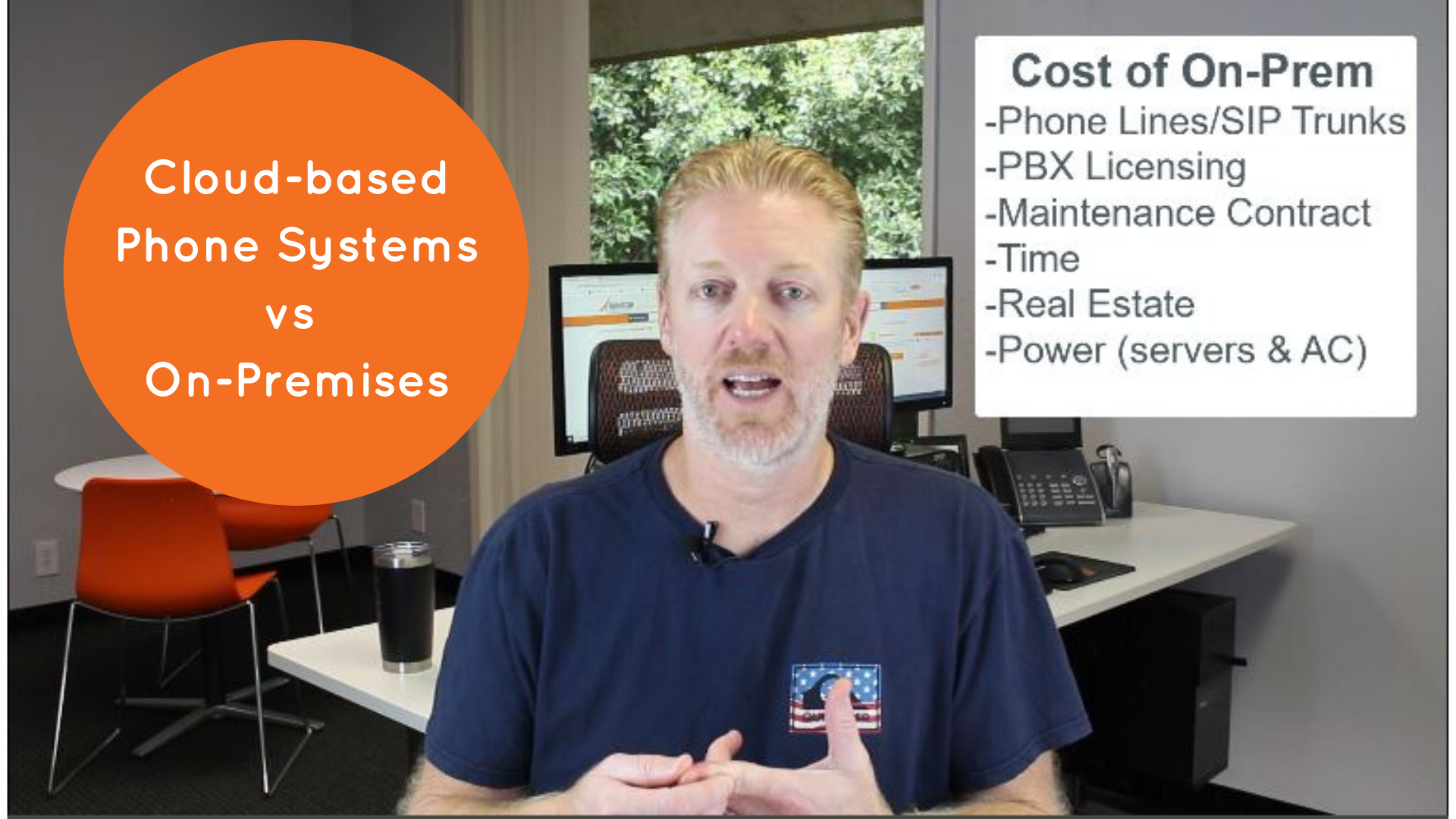 And then how much power is your phone system taking up? What about air conditioning, extra air conditioning that’s used to cool those servers all the time? So when you factor in all those costs, it’s actually about the same price or a lot of times less expensive to go with a Cloud PBX as opposed to an on-prem PBX. A Cloud PBX, if you just have normal standard features, is going to cost you $20 per user or less, maybe as low as $10 per user per month, just depending on how many extensions you have and things like that, what features you need. So when you look at that cost compared to all those costs I mentioned with on-premise PBX, it’s really easy. So that’s number one.

Number two, as we’ve all seen during this COVID pandemic, is resiliency. Cloud PBX, in addition to being less expensive at the same cost as an on-prem, Cloud PBXs are a lot more resilient. They’re not reliant on your on-premise infrastructure. So, for instance, if the power goes out or if all your employees have to go work from home and they’re all having to tunnel into your internet connection, does your internet connection have backup? Is it big enough to take your entire workforce to be able to tunnel in and access your phone system through your internet connection? Things like that you have to take into consideration. If you have multiple locations, multiply that out. Configuring an on-premise phone system between multiple sites and then having to have the resilience of a Cloud phone system, how many boxes do you have with an on-premise phone system, meaning how many servers do you really have?

How redundant is it? If the server goes down, do you have a backup somewhere else that’s geographically diverse from the main server? So all those things considered, a Cloud PBX is much more resilient. You’re going to have much more uptime with a Cloud PBX. Everyone has this cell phone app and no matter what phone calls are being answered all the time, because the PBX itself, the servers, are in the Cloud and they have multiple backup servers, so even if one data center goes down from that service provider, they’re not going to let all their thousands of customers go down. They have redundant servers in redundant data centers that are geographically diverse. So it’s really hard to duplicate the amount of resiliency that a Cloud PBX has. And the last reason why Cloud phone systems are really taking off is the call quality is great.

There was some concern about that way back in the day, but mainly now, because bandwidth is so easy to get to, companies have hundreds of megs of bandwidth and they’re a tiny company with business class cable. So back in the day, when you had a T1 line, there was a 1.5 meg connection, your phone calls were competing with a lot of different things on the internet. Nowadays, with hundreds of megs of internet available, your phone calls are not going to compete nearly as much as they were in the past. A single phone call only takes up a 100K approximately per call. So if you have a 200 meg, 300 meh, 500 meg gigabit internet connection, it’s going to be really hard to overuse your bandwidth to where it’s going to crush your call quality. And even then, you just need to get a firewall that has prioritization so it prioritizes your phone calls over your other internet traffic.

So the call quality is fantastic. Yes, landlines do have good call quality. It doesn’t have to go over the internet. But landlines are going away. Sooner or later, you’re going to be faced with either you have to go with either SIP trunking or hosted PBX. So both of those technologies go over the public internet, so that alone tells you that the public internet is fine for phone calls. It works absolutely great. So all three of those things combined, number one, the cost, number two, the resiliency, number three, the call quality is fantastic, all those combined are the reason why companies nowadays are all moving over to Cloud PBX. If you’re a company whose phone system is end of life and you buy a another on-prem phone system, you’re really making a big mistake. Nobody is doing that. There’s a couple companies that are that maybe you’re in a remote area and have very little access to a solid internet connection, yet they absolutely need phone service to be working perfectly at all point in time.

Say you’re a school in a remote area that has really poor internet access, yes, that organization needs an on-prem phone system and they can’t put their phone system over the public internet. But that’s really rare. It happens sometimes, maybe 1% of the time. The rest of companies out there, the answer is you should absolutely be going with a Cloud PBX.

I hope that helps a little bit. If you want to know which Cloud PBX providers are the best for your company, it really comes down to your specific company’s requirements. Don’t scour the internet trying to find the best hosted PBX companies. Just call me (714.593.0011), shoot me an email. I’m happy to tell you which hosted PBX service providers are the best fit for your particular business. Maybe a handful of them, compared to the hundreds that are out there. Don’t look on Google, just call me.

Our company does not charge you a dime for our service. The service providers actually pay our broker fee. So there’s no reason not to call me. I’ll help you out. It will cost you nothing. I’ll save you a ton of time and mistakes from choosing the wrong provider. Hope you have a great day, and I’ll catch you on the next video.